I got up refreshed and shared some coffee with the neighbors.
IBMC members (ibmc.org)  I will have to consider joining since bikes and camping are in my future.
I packed up and rolled out, with the mail goal being to see Jackson Hole today.
On the way, I passed the Craters of the Moon National Monument.  It was almost spooky the landscape looked so alien.  Turns out that this is the result of lava pushing up through cracks.  It does make you think you are standing on the moon. 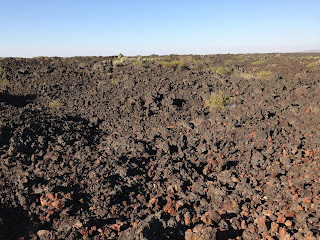 My ride did approach Jackson hole and I stopped at an overlook that let you see the valley below. 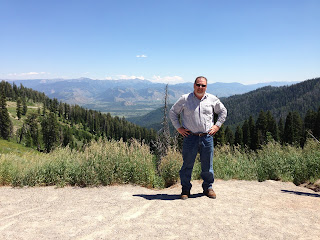 The ride down in to the valley was fun!  10% grade and twisty!  I rode around a bit to see the mountains from different angles.  The 'best' spot to see the Tetons is supposed to be from Schwabacher landing, with a nice view of the mountains and the Snake river providing a reflecting surface for extra magic.  Unfortunately, this is not currently available to the public.  Here is my shot from a near by scenic overlook. 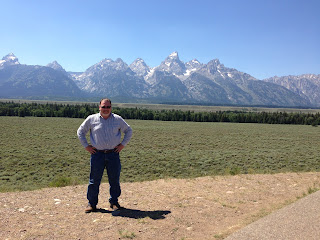 I rode in to Jackson to get a soda and get a picture of the antler arches.   The drink I got.  The antler arches were mobbed by tourists.  They were walking out into the street blocking traffic to get a good angle.  Nobody got a clear shot because there were zillions of people all around.  I skipped out and started the ride east.

I thought about those arches a bit as my shadow grew longer. 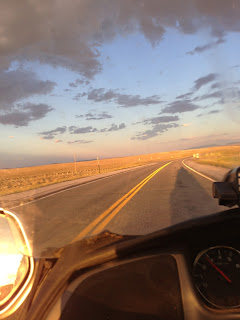 I stopped to get a shot of the Wyoming sun setting behind me. 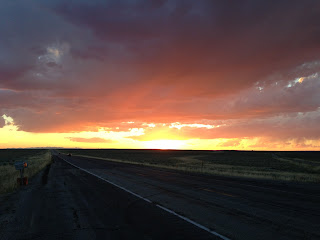 And looking east, the shadows of the clouds were visible in the sky for a cool effect. 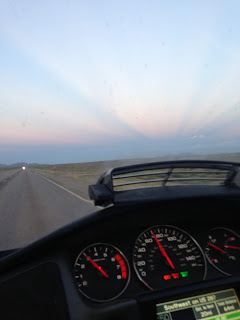 But the thoughts of the antler arches were still on my mind.  The picture was on my list to do, but when I got there and there were all the other tourists scrambling for the same shot, something happened.  I guess I decided that I had had enough.  I was saturated.
Seeing the Tetons was wonderful.  The tourist mob in Jackson not so much.
It was time to go home.

So home I went.  I set my aim for a KOA in Rawlins WY.  I want to point out that I almost did not make it, thanks to the construction crew that had started a resurfacing project on 287.  I was cruising along at a fair highway speed with the road to myself.  The orange signs for construction pulled me down to the speed limit.  The sign for grooved pavement and I dropped down to 50ish.  I rode on the grooved pavement for a while and saw cones dividing the 2 lanes ahead.  I dropped down to about 45 when  boom, the pavement ended.  I dropped about 6 inches to the very loose dirt.  I was not prepared mentally for the pavement to end unannounced!
Klaxons were screaming in my brain as I got off the throttle and worked desperately to keep the front wheel under me.It felt like forever, but eventually the bike slowed down to walking speed which is all I wanted in this loose, sandy, dry soil.  I crept along, trying to get my heart out of my throat and back in to my chest.  I finally got out of the pavement-less section and breathed a huge sigh of relief.
There were 2 more sections like this over the next several miles.  On the third section, there was a sign that stated Pavement Ends.  Really?  That SURE would have been helpful on the FIRST section!

I made it to the KOA long after the office was closed.  I have used the night check-in process before, but there were only 3 or so spots open.  Also, the wind was howling, with little tree cover to offer protection.  I looked across the highway, saw a hotel and decided to go there.  Good choice, as the wind was moving fast enough that inside the hotel it could still be heard.  I am sure the tent cover on my camper would have been flapping hard enough to keep me up.

Vince Herman
I have a wife (Marion), 2 grown kids (Rob and Molly) and life is good. By good, I mean mostly go to work and pay bills, but I DO get to ride my bike, play games with friends and enjoy RC activities with my family and other club members (and Marion!).